Everything about the 5 Basic Cavy Color Genes (A, B, C, P, E) in one handy chart...color names matched to the ACBA standard. 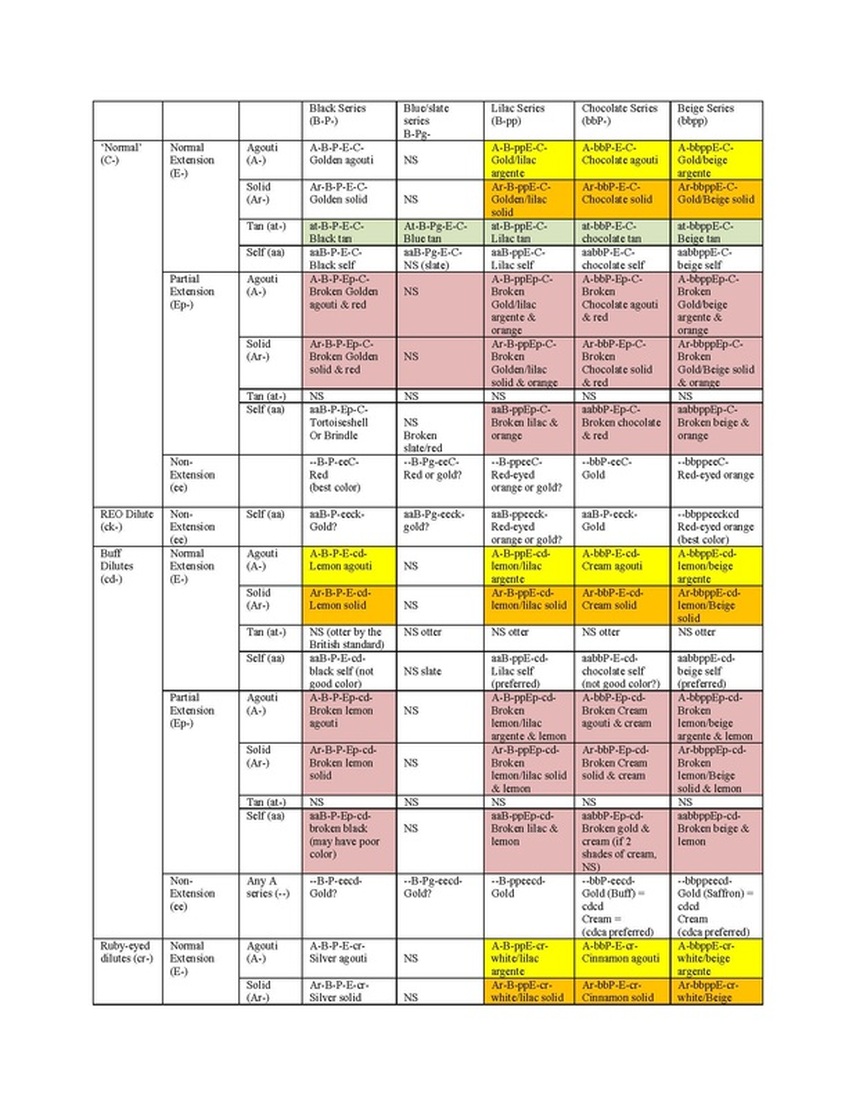 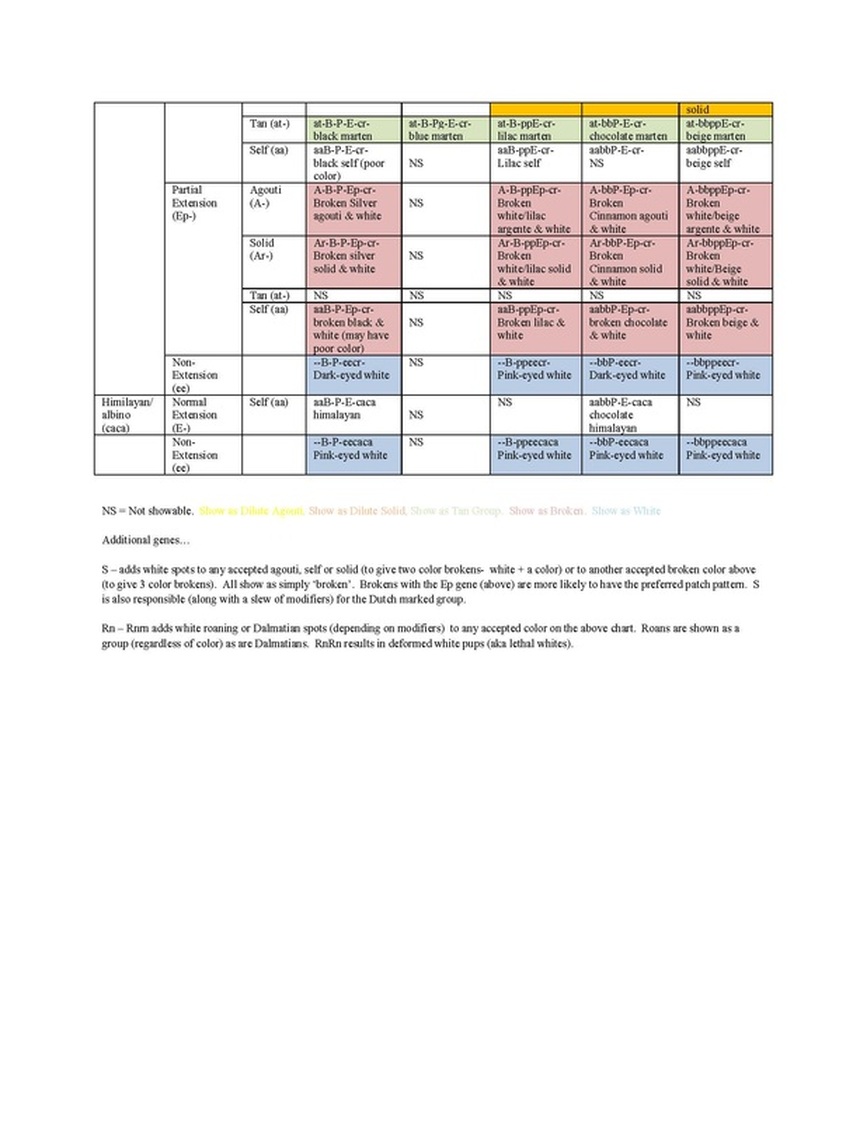 - Dilute Agoutis (ACBA standard) consists of 10 colors shown as a single group "Dilute Agouti". These are highlighted in yellow.
- Dilute Solids (ACBA standard) consists of 10 colors shown as a single group "Dilute Solid". These are highlighted in orange.
- Tan (ACBA standard, American only) consist of 10 colors shown as single group "Tan".  These are highlighted in green.  ACBA currently accepts slate/blue animals produced by the Pg gene ONLY in the tan group.
- White (ACBA standard) includes both dark-eyed whites and pink-eyed whites.  These are highlighted in blue.  Standard calls for pink ears for both the DEW and PEW.  Some genotypes included here for DEW may give animals with darker ears which are not showable.
- Entries in the chart for the 'red series' are collapsed with -- indicating any A gene (A-, Ar-, At-, aa) as the effect of the A gene is largely hidden by the ee genotype.  The red series is subdivided into Red, Red-eyed orange, Gold and Cream based on eye color and color intensity.  Degree of intensity can be substantially altered from the above 'baseline genotype indicators' by the action of rufus factor modifiers (for example, a red with poor rufus factor may be so light as to be considered a gold).
- Chocolate himalayan can be shown in the himalayan group (ACBA standard), however, preference is given to the darker point color more typical of the black.
- Broken is a large group consisting of animals with patches in 2 or 3 colors.  These can be any of the two-color combinations of the accepted colors (highlighted in pink above), any single accepted color above with white (added via the white-spotting gene S), or any two-color combination above (pink) plus white (two colors plus white to give three colors - white again added by the S gene).  Agouti, solid and self are all acceptable in brokens - tan pattern is not. Tortoiseshell and tortoiseshell & white are judged separately from each other and from the rest of the brokens.  Dutch (a small subset of the allowable single colors plus white added via the S gene with modifiers to achieve the correct pattern) are also shown separately.  All other brokens are shown as a single group.  The ideal alternating harlequin pattern of the broken is more easily achieved with the Ep gene than with the white spotting gene (S).  Tri-colors have both the Ep and white genes.
- Roan and dalmatian are not included in the above chart.  These are achieved by the addition of the Rnrn genotype.  Roans are shown as a single group under the ACBA standard -- roan plus any single accepted color in the above chart (NOT pink).  Broken roans may be shown in the broken group (not the roan group) but are not preferred as the roaning 'blurs' the patch edges. Dalmatian is a derivative of the roan genotypes in which modifiers cause the colored hairs to cluster in spots.  Dalmatian is shown separately from roan in the same colors.  NOTE: the RnRn genotype results in 'lethal white' pups with usually severe deformities of the eyes and teeth.  For this reason, roans & dalmatians should be bred to solids - never to each other.